Halloween Birds Who Are They?

Halloween Birds To Decorate For Halloween

Personally, I don’t think we should ever decorate for the holiday of October without using some Halloween birds. So, which kinds of our feathered friends work well with our decorating schemes? Well, I have some ideas for that so let’s talk about who the birds of Halloween are to start with. That kind of foreboding looking feathered creature at the left is a raven that I found on the website Pixabay. He and his cousin the crow make great additions to a Halloween decor, we’ll talk about why a little further down the page. Most people think about including bats in their traditions but we shouldn’t forget about owls in our planning for the festivities, either. So, without further ado, let’s find out who the birds are and why they are associated with Halloween.

For centuries both crows and ravens have been associated with bad omens, the devil and all sorts of realms of the darkness. Often times Crows or their larger kinfolk, the raven, are familiars to a sorcerer or sorceress in the spooky stories and movies. Maleficent comes to mind, she has some of these birds who spy for her and do all sorts of dastardly deeds. Both crows and ravens are quite large as birds go and are very intelligent. Ravens are the larger of the two birds but they don’t live in all areas of the globe. Crows are often more prevalent when it comes to spotting them in our neighborhoods. Both of these black birds eat carrion which means they eat dead things. That might be one of the reasons they are commonly seen in Halloween scenes and considered a good choice when it comes to Halloween birds. Even the phrase used to describe a group of them sounds spooky: a murder of crows or an unkindness of ravens. You have to admit that is kind of scary if a group of them are flying your way! Either one or a combination of both would be very appropriate in your holiday decor for the fall of the year. 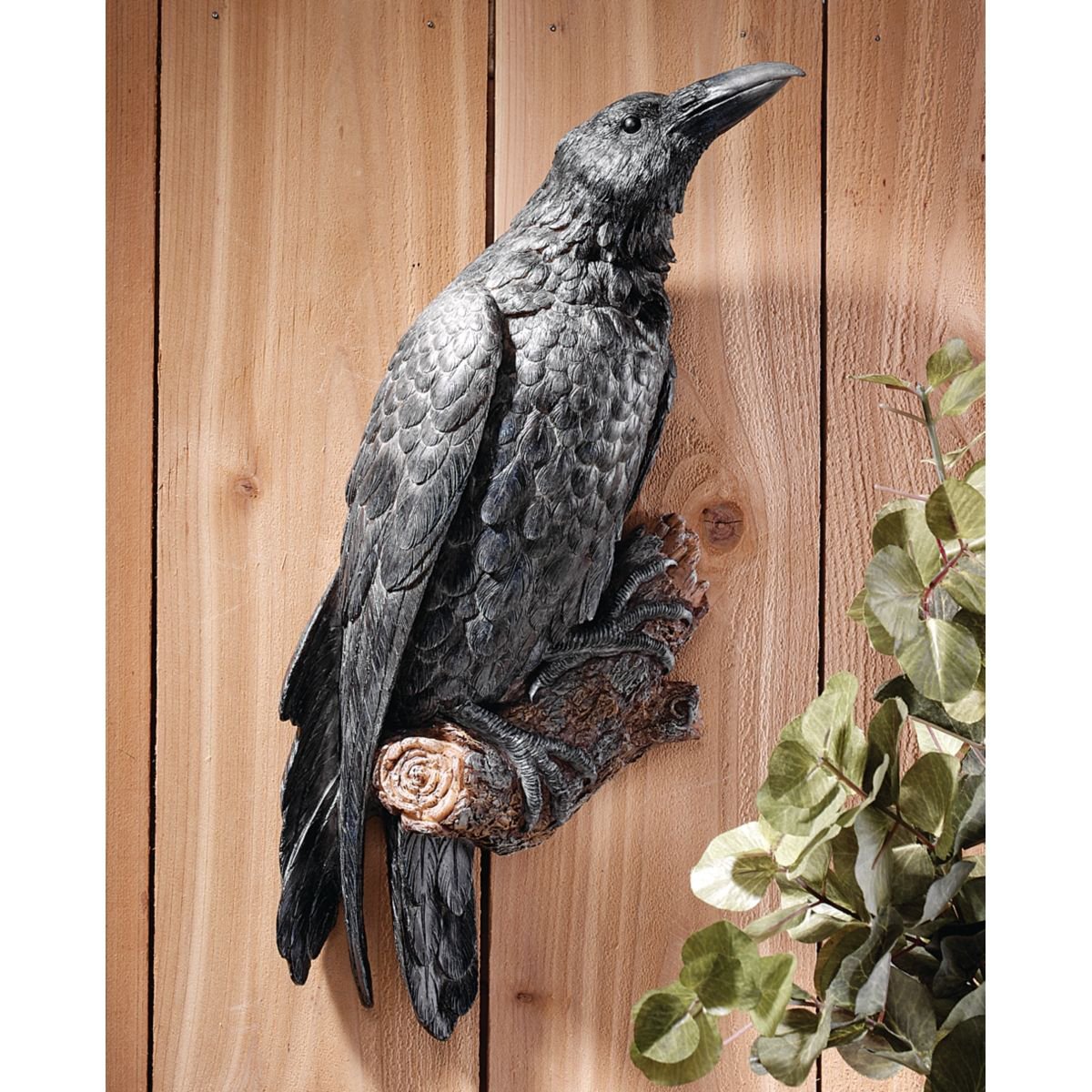 Bats: An Obvious Choice For Halloween

When it comes to the creep factor bats most definitely fill the bill for Halloween birds. People associate them with vampires and spooky things that fly in the night. That is kind of a bad rap, in my opinion, because bats are really beneficial when it comes down to it. Those little birds of the night can eat their weight in mosquitoes and that, folks, is not a bad thing. There are only 3 species of bats who actually feed on blood and unless you are strolling around at night in South America and parts of Central America, it is doubtful you will ever encounter one. Still, Bats make for some nice spooky decorations when it comes to celebrating Halloween.

Owls Hang Out With Witches And Wizards

Well, at least some do. Ever hear of a wizard named Harry Potter? Didn’t he have a familiar named Hedwig and wasn’t he an owl? In some cultures of the world owls are associated with magic, more specifically, black magic. That is why I include them in the Halloween birds of this post. Not only do Owls hang out with the witches and wizards of the spookiest night of the year but some superstitions say that they are the only creature that can live with ghosts, another entity of Halloween. So, I recommend that you have at least one owl as a part of your decor.

Here is an easy idea for some small additions to your Halloween party and decorations. Stop by a Dollar Store or a place that has cheap stuff and pick up some of those little birds that either sit by themselves or are on a stick that can be placed in dirt. Take some black spray paint and paint the birds all black. After they dry, paint the eyes orange or red. Voila! Instant, Halloween birds to use for decorating with!

6 Scary Halloween Yard Decoration Ideas
Halloween Flamingos For Your Yard
Making A Perfect Jack O Lantern
Homemade Halloween Teeth
How To Make Pirate Costumes for Kids
How To Celebrate Halloween without the Trick or Tr...
How To Plan a Fortune-Teller Party this Halloween
How To Make a Clock Costume for Kid

+Beverly Owens loves to celebrate life in general and most especially holidays like Halloween. She also writes on her own site House of Rumpley about all kinds of decorating.
View all posts by Beverly Owens →
Bookmark the permalink.