How to Make a Halloween Mummy 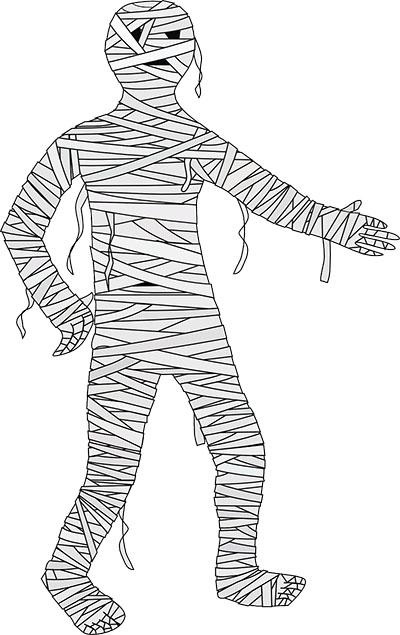 If you want to make a Halloween mummy, so that you save money on your Halloween decorating expenses, you do not have to get an inflatable mannequin or so. Instead, you’ll just save your newspapers: just assemble them in order to create a “human” body.

Once all body parts are ready, use tape to stick all the parts together. You’ll then cover the entire body with hospital bandages. Obviously, if such purchase doesn’t fit with your budget, you can use toilet paper to feature the bandage. Preferably use monochrome toilet paper as I’m not sure that scented flowery paper will make it 😉 Secure the toilet paper by adding a coat of glue mixed with some water; this will also make the bandage stronger. Add a few decorations so that you make it look older.

When your mummy is ready, place it in the living or dining room. Alternatively, if you add a coat of varnish, you’ll even be able to put the mummy on the porch so that your neighbours can admire it when they pass by your home.

The best way to scare people with your mummy is to put it in place they won’t expect to see it, such as the bathroom. Another great place is the one where your guests hang their coat when they come to your home… surely they didn’t think a mummy would have been there and chances are that you’re going to hear they scream!

The other way to make a Halloween mummy at home would be to use adult size used white clothes. If you want to make a small mummy, use well-worn child white clothes. Choose the clothes you’re going to use and stuff them with old newspapers – your mummy is now supposed to look like a strawman.

Add a pair of gloves to feature the hands and attach them to the cloth arms using gauze or toilet paper. Whenever you have used white ben linen, cut it into strips for a realistic effect.

Now, time has come to make the head of your mummy. For such an item, take an inflatable balloon and place it on the collar of the clothes. Wrap both the balloon, the collar and the t-shirt until they are entirely covered. If you used toilet paper to wrap the mummy, secure it with a coat of glue mixed with water. You can make the eyes with black construction paper glued on the face.

Where to Place your Homemade Mummy?

Most mummies are always lying or standing in their sarcophagus so you can get creative and have your mummy sitting on a chair in the dining room for example. You can even have it near the entry door, next to the candy bowl so that it scares the trick or treaters on Halloween day.

But I’m pretty sure that any place you’ll place your mummy will surely be the best one. Whenever the fabric, bandage or strips should come off just patch it up as fast as you can.

As said earlier, it is best to give your mummy an aged appearance. This can be done with some spray paint. Mostly, translucent brown and beige are colors that fit with the idea of an old mummy. Such spray cans can be purchased in any good craft store.

What to do with the mummy after Halloween? Well, just take a last picture and place it in the attic, the cellar or the garage till next year. In any way, don’t throw it away, it has become a new part of your Halloween decorating collection and should get back next year for the pleasure of the entire family and your guests.

And if you liked the idea of making your own Halloween mummy, you might want to make decision on wearing a Halloween mummy costume this year. For such a purpose, reserve the bed linen strips for your costume and create your mummy with toilet paper. Hm… what would be the effect produced on your guests when they’ll arrive at your Halloween party and see you and your homemade mummy near the entry door?

Holly Day is fond of holidays and special celebrations. She's always looking for tips and ideas for gifts, parties, costumes, crafts, recipes and more to share with the world.
View all posts by Holly Day →
Tagged  homemade halloween crafts, how to make, how to make a mummy, make a cloth mummy, make a halloween mummy, make a toilet paper band mummy.
Bookmark the permalink.